Jack is at a funny age. He has traded some of his joyfulness for an expanded world view.  He has begun problem solving and trying to make sense of the greater world.   Year four was a struggle with Logan as Trey and I wrestled with moving beyond simple toddler tantrums into a need to understand, reason, and work things out on his own.  As we enter Jack’s, fourth year, I’m reminded of some of Logan’s struggles (and our struggles to catch up with his changing needs) and am trying hard to accommodate Jack.

Lately, Jack has been having a difficult time. He was excited to try out both t-ball and soccer but has found them both difficult.  He wants to be big like Logan but lack attention, coordination, and experience.  We didn’t have to navigate these particular growing pains with Logan as he had no one to compare himself too. 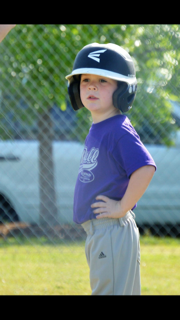 My typically joyful child has cried himself to sleep in protest of daycare the following day and awakened crying.  We have a wonderful daycare that employs teachers that love on my kids every day.  I know that this is simply a phase Jack is going through and not an implication that anything is going wrong at school.  Jack has decided that he needs a best friend and for whatever reason, doesn’t feel like he has found his best bud yet.  He will name other pairs of friends at school but then lowers his eyes and tells me that I am his only best friend and since I’m not at school with him, he is alone.  Thanks, bud.  My heart is breaking.  On the way to school the other day, Jack was crying and protesting.

J: I don’t like school days!  I want you to stay home with me and play tball with me all day!

Me: Jack, remember that I am going to work while you do your work at school. You are going to play with your friends and learn from your teachers.  You will eat yummy foods for lunch and for snack. I will pick you up because I always come back for you!

Jack: You are not my best friend anymore! I want a new Mommy and Daddy!

Me: Wow, critter!  I am sad to hear that.  I would never want a different son!?

Jack: I want a different son! I want us to get a black son!

Me: A black son? That is an interesting idea but remember that our family has 5 people and that is our limit.

Me: Why do you want a black son, Jack?

Jack: Because that white SUN is always getting into my eyes.

These are the conversations I want to remember. I want to recall his growing awareness and vocabulary no matter how difficult it makes things in the moment; the circular arguments that have no win for parents and make us want to pull our hair out (if Trey had hair…).

When Logan was four he desperately wanted a stepdad. He cried and argued that we were the meanest parents ever because we wouldn’t let him have a stepdad.  No explanation or reasoning seemed to help.  Trey explained that if he had a stepdad that would mean that daddy didn’t live in the house anymore and that he wouldn’t get to see both of his parents every day.  In Logan’s mind, however, he knew that Big Phil, Trey’s stepdad, was the coolest.  Why wouldn’t he want another parent like Big Phil?  It made sense to him, even if it hurt Trey’s feelings a bit.

Since my Dad’s death, I’ve often felt like a four year old. I’ve found myself looking at the world in a new way and trying to make sense of things I thought I already understood.  In the past (almost) six months, I have reevaluated my marriage (no panicking, I’m keeping Trey), how I want to parent, my friends, how I spend my precious free time, and how I want to leave this world (again, no panicking…this isn’t a ’13 Reasons Why’ moment).  Goals I found important last year, have faded and things I valued before, have lost their luster.  With each stage of the grief journey, I’m trying to leave a little pain behind but put something more worthwhile in its place.  It’s hard, folks, really hard.

A couple months ago, Mom announced at a Sunday lunch that she needed to prepare herself for upcoming days that might be difficult. We all knew that April would bring back to back gut checks and so we began to brace ourselves.

We all prepared in our own ways. We spent the morning of my birthday at a t-ball game and 2 soccer games and then distracted ourselves in the evening with good friends.  Day 1 was a breeze.

Easter was more difficult but we pulled through. Well, Trey and my friend Wendy pulled me through.  Due to various circumstances, I found myself without a seat for church (I was helping Logan acolyte and Trey and mom found the last 2 person pew).  I ended up sitting away from my family but with Wendy, who was also having a difficult time.  She posted on her Facebook that afternoon that she’d needed a friend to sit with her.  Little did she know that by inviting me into her pew and holding my hand, she held me together for that entire service.  I will forever be grateful and will view Easter Sunday with a new perspective.  I cried a lot that day.  Trey alternated between providing me space, giving me comfort, and reminding me that there are 3 kids watching my every move so I needed to pull myself together.  And I did. 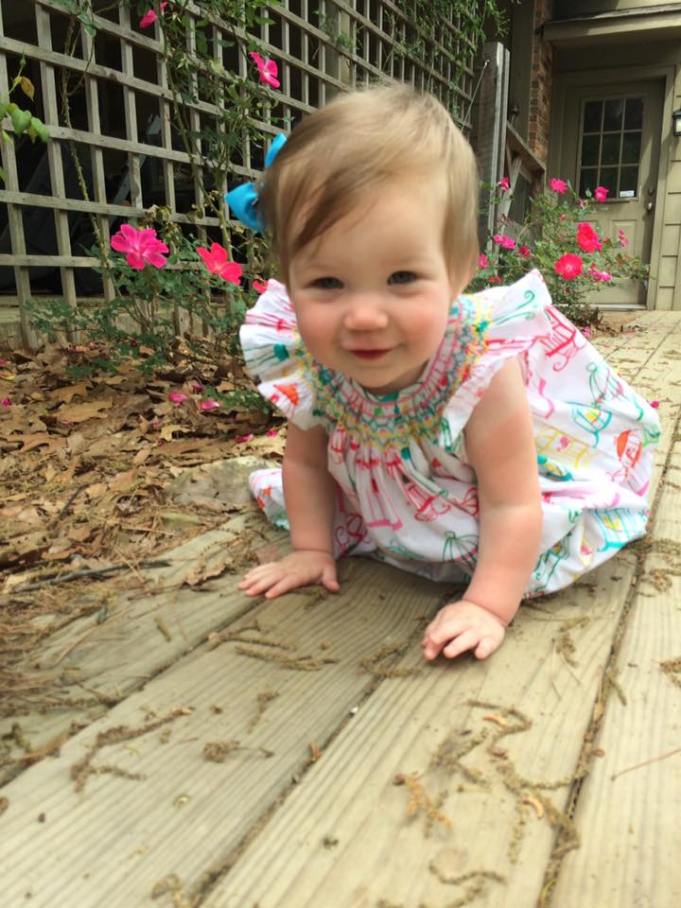 I made it through the anniversary and Norah’s birthday fine. Like Dory’s motto goes, “Just keep swimming!”  I kept patting myself on the back because I’d made it.  Another set of difficult “firsts” were behind me and I was/am still standing.  Then everything crashed inward.  On April 21st, Logan ran in his school’s 5K.  One year ago, I stood at the finish line without any expectations of how he would finish and he came barreling around the final corner and across the finish line in 3rd place.  I was 3 days from delivering Norah but I jumped up and down and went crazy!  As soon as I hugged his sweaty neck I called my Dad to report Logan’s finish.  He asked for Logan’s time and asked about his form.  We were both so proud.  Dad was in the middle of a meeting and shared that he’d gotten misty eyed hearing how well his eldest grandson had done.  This year, Logan beat his time from last year and his form was impeccable. I walked over and hugged Logan’s sweaty neck as I had done the previous year but I didn’t get to report to Dad.  Logan hugged me and went to find my mom, who was subbing that day.  They also hugged and then Logan cheered on his friends as they crossed the line.  I lingered all the while fighting back throaty sobs.  I’d prepared for the hard days April was bringing and I’d made it through.  Why couldn’t I get through this one too.  I fought tears all day.  When I picked Logan up from school, several hours later, I began crying again.  He said, “I know, Mom.  I wanted to tell him too.”  The thing is that I have expected the holidays to be hard but it’s the other moments that seem to be the most painful.  It’s hard to prepare for the unexpected moments that I want to ask Dad something or all of the times I want to brag on my kids to him.  As a therapist, I’ve worked with people though grieving but I definitely am seeing it differently now.  You can’t prepare for everything.  There is not chart for these high tides.  My worldview is changing.

Norah’s 1st birthday party was equally as difficult.  Again, I hadn’t braced myself because in all honesty, Dad would have found the party a bit miserable.  He would have laughed at my “baby feminist” theme and enjoyed taking pictures of Norah tasting her first cake but the small talk and forced joy would have bored him.  Sure, we would have talked books, politics, and music but we did that all of the time.  I just couldn’t shake feeling bitter that he can’t watch his granddaughter grow up.  With every picture taken, the bitterness that we somehow failed to take a single picture of Dad holding Norah corroded my soul.  I was angry that some family chose not to come to the party and found it difficult to appreciate those who were there.  I kept reminding myself to be in the moment and focus on Norah but it was difficult and it hurt a lot.  Afterwards, a couple friends sent pictures from the party.  I know that I will cherish those pictures above any others because they pulled me through those few hours.  My village lifted me up once again.  With Logan and Jack’s first birthday parties I was focused on the décor, cakes, and party.  This time, it is my village.  These people have chosen to be in my life and allow me to be in theirs are carrying me through. 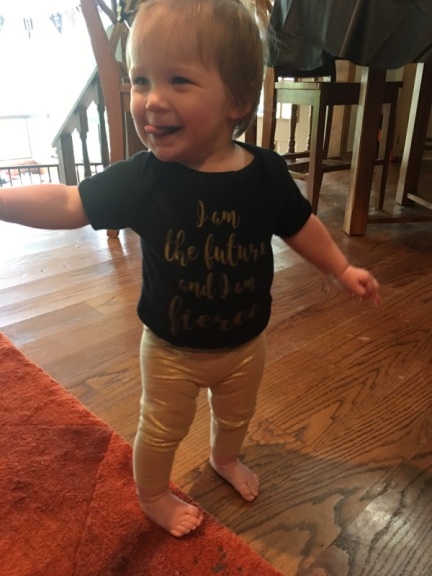 Leading up to Easter, Jack kept asking if GrandDude would be at various scheduled events. “Will Dude be at my t-ball game?”  “Will Dude pick me up from school?”  “I will see Dude at soccer, right?”  Logan was growing increasingly more impatient with Jack’s questions.  “No!  Dude is dead!  Remember how Mom told you that he lives in Heaven in Jesus’ neighborhood?”  But Jack wasn’t satisfied and kept asking.  “I want Dude to come play with me.”  “Let’s facetime Dude!”

Jack: Mom, that’s my school. You forgot my school!

Me: Jack, your school is closed today. Remember?

Me: *ummm (note to self: we may need a theology lesson or two) Well, it is Good Friday.

Jack: Yes! Jesus was dead and bloody on a big ‘T’.  They put him in a hole and covered it with a big rock.  Then he gotted alive again.  (*sorta…)  And now Dude is alive too!  He can come to my t-ball game and my soccer and pick me up from school…

Now I knew why he’d been so confused and how the heck do I make this all make sense to him when it doesn’t make sense to me? I’m sure that there are multiple amazing ways I could have handled this moment but, instead, I quickly pointed out something benign out of Jack’s window.  The ol’ switch and bait.

Things look different these days. Different through my grief lens and different through Jack’s growing lens, but we are making it.  We will continue to rise to each challenge, even if we fall short, and quest to do life as gracefully as we can…together.

3 thoughts on “As Our World Changes”