Both boys woke early this morning, eager to welcome Trey home from a weeklong mission trip.  Logan listed all of the things he wanted to tell his dad about soccer camp, spending the night with a favorite cousin, and back to school shopping.  Jack kept asking “My Daddy home?”  A week is like a lifetime to a two-year old.  Trey no longer travels often for his job so we are used to having him around.  I’m not used to sleeping alone and certainly not used to the house being so quiet, once the boys go to bed.  A little over a year ago his job required frequent travel but we were still accustomed to having him home on the weekends.  Over breakfast this morning, I reflected upon the shift in habits over the past year and laughed about how excited we all were to welcome him home after just a week away. 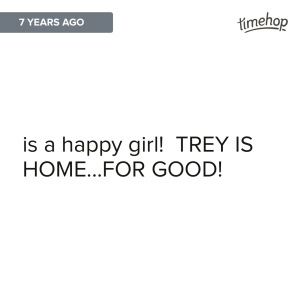 Later in the morning, I checked my “time hop” app on my phone and discovered that 7 years ago today, Logan and I welcomed Trey home from his second tour in Iraq.  I remember that day as though it were yesterday.  I hadn’t laid eyes on my husband in over a year and I woke full of anxiety.  The first deployment was difficult too but it had been shorter and I’d had more flexibility to practice self-care because we hadn’t had Logan yet.   This time I had more anxiety where the first deployment’s homecoming just brought excitement.  With the first homecoming from Iraq, all either one of us could think about was (1) Trey showering, (2) “snuggles”, and (3) Trey sleeping.  We had the same priorities this time but also added time with Logan and figuring out our future.  We both knew this was the end of deployments for our family but we didn’t know what would come next.  What if we’d grown apart?  What if we’d experienced too much life individually to continue together?  What if I’d gained too much weight and was no longer attractive to him?  How much had war changed him?  Additionally, I had anxieties about his reunion with Logan who was just 6 months old when Trey left.  Logan wasn’t used to being around many men and was very attached to me.  I had tried warning Trey over the phone that Logan may not immediately warm up to him and suggested he be patient.  We’d played recordings of Trey reading and singing to Logan every day during the deployment so I hoped that, at the very least, Logan would recognize Trey’s voice.  We had asked family to not attend the homecoming because we wanted time to reconnect as a family of 3.  Logan and I drove 45 minutes from our home in Savannah, Georgia to Ft. Stewart.  Just shy of 2 years before, Trey and I had made the same drive together to the post hospital to have Logan.  The feelings were overwhelmingly similar.  When we pulled into the parking area near the hangar hosting the homecoming, I saw families with balloons and signs.  I also saw many faces depicting similar anxieties that I was feeling.  I had dressed Logan in a t-shirt that sa 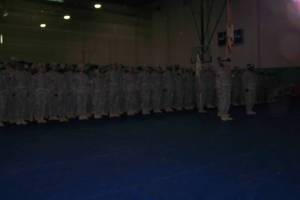 id “I get my muscles from my Dad” but knew I wouldn’t be able to manage both a wiggly toddler, signs and balloons, and the heavy emotions I was feeling.  Logan was intimidated by the crowd of people inside.  We were given small flags to wave through the ceremony and I spent several minutes keeping Logan from poking me in the eye with his flag or throwing it on the floor.  We were swept into the moving crowd of family members towards bleachers and took our seat five rows up from the floor.  People around us chattered about their service members’ homecoming plans.  The woman behind me was holding a newborn that her husband had not yet met.  The family in front of me was identifying what corner they planned to move when the soldiers were released from formation so their son could easily find them.  Trey and I hadn’t made a similar plan but I wasn’t concerned.  Trey’s big noggin’ is typically identifiable across groups of people.

After eons of waiting, we were asked to stand as the soldiers marched into the room.  The excitement and tension were unbelievably strong.  People screamed, jumped, cheered, and cried while facing soldiers who stood perfectly still and silent.  Logan was terrified by the loud ceremony and gripped me for dear life.  As scared as he was, I have often wondered how intense that moment felt to the soldiers, many of whom were returning with PTSD.  I have no clear memory of what was said at the ceremony just the intensity of standing as a room divided.  Overt celebrations vs. adherence to formation.  When the soldiers were released from formation, chaos broke loose.  People stampeded down the crowded bleachers ready to embrace their soldiers.  I was pushed from behind and almost fell down holding Logan.  I sat down to keep from falling aware that by doing so I was shielding us from Trey’s line of sight.  We continued to sit on the bleacher as the crowd surged around us.  Shrieks and laughter filled the air while Logan and I clung to one another.  Once we had room to stand again, I did so tentatively.  My eyes scanned for Trey and we soon spotted one another.  He grinned broadly and started to make his way through the crowd.  For weeks I had composed various homecoming speeches or daydreamed about romantic embraces but in the actual moment all of my thoughts and emotions seemed to get stuck in my throat.  Trey seemed to anticipate Logan’s caution and gently approached the two of us.  Still unable to form words, I leaned into Trey’s chest.  Logan stared at his daddy’s face as though he was searching his files for recognition.  Trey grabbed my hand and indicated that we ought to leave.  It was surreal to walk beside Trey and feel my hand in his after so long apart.  With my lack of grace, it’s a wonder I was able to walk to the car without falling since my eyes never left his face.  Words and thoughts returned as we made our way towards home.

Movies and tv shoes depict military homecomings as a linear process and, at least for us, it was nothing of the sort.  We had to reestablish routines, Logan and Trey had to develop a relationship, and we had to adjust to personality changes that happen during the course of war.  The easy adjustments happened quickly.  The day after Trey came home we went to a local restaurant to eat and Logan’s brain clicked.  When Trey went to refill his drink, Logan pointed and started yelling at the top of his lungs “DADDY!  DADDY!”  I’m sure most people in the restaurant wondered why Trey and I began to cry because our child was screaming in a restaurant.

Other adjustments took longer.  I’d managed the money and the household for 15 months and had difficulty sharing the duties.  Trey knew to continue his career in the Army meant more time away from his family and that was something he wasn’t willing to sacrifice any longer.  It is hard for me to separate his homecoming from the life that followed  because I know the highs and lows that were to come.

Today’s homecoming from Ozarks Mission Project brought dirty laundry, a tired daddy, and overstimulated boys but was just as sweet as the others.  I thank God every day that I was able to welcome Trey home from Iraq twice and think often of our friends that had a different experience.  Seven years ago.  It is hard to fathom that it has been that long and yet carries such strong emotions even today.  We were both changed forever by these experiences.  I can’t allow myself to wonder “what if” things had turned out different because that isn’t productive.  What I do allow myself is the feeling of gratitude for every homecoming we continue to have.

One thought on “Homecoming”