December marked the end of an era. (And by era, I mean a 6 month period.) Logan quit tap lessons. I’m heartbroken that there won’t be future top hat and tails performances by my little monkey. He had begged since he was 4 years old to take tap and this was the first year that the stars aligned and we relented. Each summer we watch “So You Think You Can Dance?” and the tappers are undoubtedly our favorites. Last season, Logan turned to me mid episode and said “Mama, this is the year. This is the year I become a tapper!” I signed him up at the local dance/gymnastics factory, bought him a pair of tappy tappers, had Trey cut him a piece of wood to tap on, and even bought a bag that said “Boys Can Dance.” We were ready. The night of his first class, I could hardly wait for a report. He said it was “kinda fun” but was disappointed that the girls in the class kept asking why a boy was allowed in and was also disappointed that tap class began with learning slow, repetitive steps rather than frantic, rhythmic stomping. He continued in class until forced to take a medical leave of absence when he had his tonsils out. When we were cleared to resume dancing, Logan learned that a holiday performance had been planned while he was out and that he was behind learning the choreography. Panic began and the poor kid began having nightmares about performing on stage and people laughing. The anxiety grew to a point that we had to let him hang up his taps and retire from dance. (Enter sad music stage right.)

I took dance for several years. I was basically a star. (And by star, I mean entertaining…interpret that as you will). My training was at a prestigious dance company (and by prestigious dance company, I mean a stay at home mom that taught dance classes in her garage for extra money). Each week, my dance teacher would back out her car, roll out the linoleum, and turn on the music. We, the dancers, would pull out our leotard wedgies and line up at the bar. At the time, I felt like I was a great dancer. I remembered the choreography, could sing along with the music, and my “show face” was spot on. Looking back, I realize that perhaps this was an example of being blinded by child innocence. I’m fairly confident that once the audience looked beyond my “show face,” the 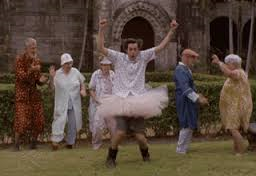 y saw a body that just didn’t dance. Imagine Seinfeld’s Elaine in a leotard…I’m pretty sure that is an accurate comparison. Thankfully we didn’t own a camcorder and there is no video evidence of my dance career. (And if it ever surfaces, I’m moving to Botswana!)

When I “retired” from my classical dance training, I decided to focus on street dance. Whenever I was alone, I practiced the “tootsie roll”, “Roger Rabbit”, “running man”, and other late 80’s/early 90’s moves. I earned quite a bit of street cred with my moves. (And by street cred, I mean I impressed the imaginary audience in my bedroom.) When my first school dance came around, I felt ready. Unfortunately, I had spent the afternoon before at a carwash fundraiser and had gotten the worst sunburn of my life. I had blisters that would make dermatologists take pictures for their “What not to do” bulletin boards. I felt horrible! If you’ve ever had a bad sunburn, you can just imagine how much it hurt to wave my arms in the air like I just didn’t care. I disappeared before any slow dances because the idea of someone holding my arms made me queasy…and not for the reasons learned in health class. I wish I could say that I rocked that cafeteria at Pershing Jr High like a BOSS but my dance moves would have to live another day.

I continued to work on my moves through high school and college. I continued to be the star of my daydreams but never found my groove socially. Some might say I dance like a newborn giraffe but that isn’t my build. Fortunately in early high school moshing became a thing. Slamming one’s body into another’s body requires no rhythm or grace. In fact, a lack of grace 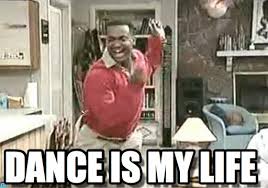 seems to be a bonus. Always the clown, I honed my dance moves. I learned the lawnmower, waitress, fish, and lasso. I can dance like Napolean Dynomite, Elaine, and Carlton.  Any slow dance involved me making goofy jokes so my partner was distracted by my awful dance technique.

When Trey and I met and began having opportunities to dance, he suggested I learn some line dances. This was a complete fail! (Joe’s Big Bamboo anyone?)  Not only do I lack grace and rhythm but I’ve never grasped telling left from right. Combined with my dislike of country music, line dancing was a fail.  Although, like any white American, I can Electric Slide and Cupid Shuffle with the rest of them!  We decided it would be a fun adventure to take the ballroom dancing class at UCA. It was all fun and games until Trey decided to one-up my funny dance moves by doing a spontaneous pirouette while we were practicing our waltz. He spun his giant elbow right into my nose. Blood gushed everywhere and he got to explain to our friends and family why his girlfriend had two black eyes.

Throughout college, graduate school, and the early years of our marriage I only danced when drinking. We can assume that 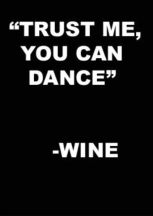 my dancing didn’t improve during this stage of life but that I simply felt uninhibited. One evening Trey and I joined several of his Army buddies for a night of fun in Savannah. I felt uninhibited enough to think that it would be a good idea to demonstrate the latest, greatest dance move and I attempted to “drop it like it’s hot.” Apparently, it was only luke warm and I fell over. As I tried to get back up on my high heels (these also had seemed like a good idea at one point in the evening), a guy thought I had dropped something and kneeled down beside me to help me look. Before I knew it, several people had joined us on the floor looking for what I’d dropped. Since I had no intention of telling them I’d dropped “it,” I pretended to 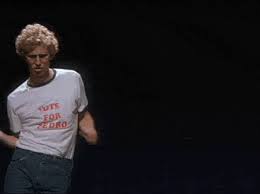 find an invisible item and thanked them all for helping look. As they all stood back up, I realized I’d inadvertently created a new dance craze…the “searching for stuff on the floor” move.

Now that I’m old and tired, I rarely dance in public. The past few weddings we’ve attended, I’ve either chased small children or sat beside Trey who now refuses to dance with me. At home, however, we are dancing MACHINES! Logan, Trey, and I recently had an epic dance battle and I declared myself the winner. Logan disagrees entirely.My bernie is pretty amazing.  Trey just shakes his head and wonders how he ended up in this state of marital bliss. Even though I never became a dance star and Logan no longer plans to be a tapper, I still can shake my groove thang at home and entertain the family. (And by entertain, I mean embarrass or cause hysterical giggles at my expense.) I’m still a little bummed that Logan won’t be the next Savion Glover or Gene Kelly. Maybe Jack will recognize his untapped talent. (And by talent, I mean …well, we’ll just have to wait and see. Right now he dances like Chris Farley’s Man Down by the River…)